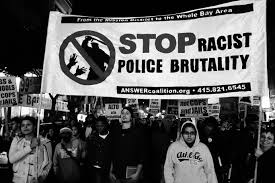 Read this In These Times report about police and Native Americans. From the report:

And thanks, Leftover, for the link. Seriously, I probably owe you a coffee.